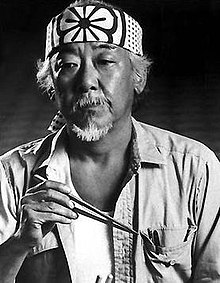 One movie that’s stuck with me since childhood is The Karate Kid.

Besides giving me dreams of learning how to do the crane kick in a real fight and becoming a martial arts expert (we can always dream, can’t we?), the relationship between Mr. Miyagi and Daniel held a lot of lessons for me.

Even after watching it dozens of times, I still enjoy the scene where Daniel throws in the towel and complains that Mr. Miyagi isn’t teaching him any karate; instead he seems like he’s just taking advantage of Daniel to get his housework done. I love how Mr. Miyagi completely reverses Daniel’s perception of things when he has him carry out a series of blocks that all those hours and days of housework taught him.  For me it’s like watching magic come alive as the mundane (housework) is transformed into the wonderful (karate!) and the expectations of the student are thrown out by the strange wisdom of the master. The biggest event in this scene, however, is not the demonstration of awesome karate moves but Daniel-san’s real acceptance of Mr. Miyagi as his master and, as a result, his graduation to becoming a genuine student of Mr. Miyagi.

This scene naturally raises a question though: “Why didn’t Mr. Miyagi just tell Daniel the purpose of all the housework at the beginning?” After all, wouldn’t this have taken away all of the frustration and anger on Daniel’s part and let him just concentrate on learning karate?

The problem with this question is that we’re assuming Mr. Miyagi’s main purpose with all the boring, difficult, useless, and confusing housework was to teach Daniel karate. In fact, karate was only an added benefit. What Mr. Miyagi was really trying to accomplish was two things.

First, he wanted to test Daniel to see if he was a real student. Was he hard working? Would he stick with it? Did he have the stuff to really learn karate or was he just in love with the idea of it all and would split the moment things got tough? Training Daniel through hard labor was Mr. Miyagi’s way of making sure he had the ‘right stuff’.

Second, Mr. Miyagi wanted to teach Daniel how to be a student. In the beginning Daniel thought he already knew how a karate master should act and how a karate student should learn. He had a whole array of preconceived ideas about the instruction process but it was these very ideas that got in the way of being receptive and open to Mr. Miyagi’s method of teaching karate. In a sense Daniel wanted to be the master by dictating for Mr. Miyagi how to do his job.  But this wouldn’t work if Daniel truly wanted to learn. So in addition to being a test, the long hours of housework were also a way of helping Daniel leave his preconceived notions behind and let Mr. Miyagi do his job.

Seeing what he had thought as only ‘housework’ turn into ‘martial arts training’ forced Daniel to reconsider his ideas about what he knew about the world and himself, and in that moment of surprise, that moment of finally understanding, Daniel became open to Mr. Miyagi’s teaching. In short, all that work turned Daniel into a real student.

So what does any of this have to do with Rumi and his Masnavi?

The Masnavi is difficult, confusing, long, often boring, and seems to lack any logical coherence or structure. Many of its stories seem irrelevant and irreverent and often a huge waste of time.

All of this however is only skin deep. It’s the surface image that Rumi presents to the world in order to accomplish the same two goals as Mr. Miyagi :

As we plow through the difficult maze of the Masnavi, only those who have the ‘right stuff’ will be able to stick with it, while those who don’t, will likely close the book in frustration and pick up something a little easier.

The Masnavi is a test and one passes the test by sticking with it. The more one sticks with it, however, the more one discovers that those very passages that seem the most boring or difficult are often the ones that most call into question our assumptions and preconceived notions about reading, interpretation, ourselves, and the world.

The Masnavi is therefore also a deep lesson in learning how to be a true student; in learning how to forget one’s expectations in order to accept the wisdom of Rumi. It’s a teaching that shows us how to get out of the way so that Rumi can step in and show us the way.

As Hafez says in one of his ghazals, we are the veil of ourselves, so we must step out of the way of ourselves in order to see clearly. The process of reading the Masnavi is the process of discovering and removing such veils.

So if you’d like to ‘wax on’ and ‘wax off’ with me for a while then get yourself a copy of the Masnavi for next month’s Rumi post. Any edition will do – you can either find online versions or buy one online. Read both the prose introduction and the proem (poetic introduction) and I’ll see you soon! Enjoy!